Today we return to the site’s roots, looking at a general strategic idea that exists across the gaming world: “Don’t position against a wall!” I’ve most recently remembered this idea from reviewing and playing Overwatch games, but it has cropped up many times before. Sometimes the wall is physical, sometimes it is metaphorical, but by definition it limits your available moves. This is a gift to the opponent! It makes their job easier. We want to do the opposite. As I’ve put it before, we want to “put the onus on the opponent.*” We want to make their job harder, to give them opportunities to misplay or guess wrong. Let’s look at some examples.

(11:54-12:18) First I’ll take a look at an Overwatch clip, though the ideas extend very naturally to games involving realtime movement prediction. It’s here that the concept of not positioning flush against a wall most recently returned to my thoughts. Here is a brief example that cropped up while I was reviewing and analyzing a set of replays from a player’s run to diamond rank. The Ana, by positioning right up against a wall, takes hits from all 3 of Genji’s shuriken. If she had a little more leeway to play with, she could force Genji to divine her movement, putting the onus on him to guess correctly in order to land his damage:

The example above has analogues in other FPS and also arena games, like League of Legends. For example, a Thresh chasing down a champion towards a wall will wait to hook until the enemy is up against the wall, reducing the directions they have for juking But you might be surprised to realize this idea comes up even outside of real time movement-prediction games. In chess they often say “A knight on the rim is dim,” referring to the weakness of the knight when on the edge of the board. A centralized knight could move to 8 squares, but on the edge will have only two options. It’s so bad that the rim knight can be completely “dominated” by a bishop, as presented by YouTube commentator MatoJelic in this clip:

(19:58-20:26) In the Overwatch example the wall was a physical wall. In the chess one, the wall is almost physical, consisting of the edge of the board. Now let’s look at a Magic: the Gathering example. In this clip from the recent Week 7 of Vintage Super League season 7, Rachel Agnes highlights a good example of a metaphorical wall restricting a player’s options. Rodrigo Togores has only 1 life left, making him unable to pay the alternate cost of Force of Will (card image below clip) without losing the game. Having even one more life would require his opponent to play around the possibility of a no-mana-cost counterspell, but as-is he’s against a wall. The opponent knows that if he does have the Force, he must pay the full 5 mana for it or not use it at all. Rachel goes on to share the amusing tale of a past an opponent of hers who threw away a winning game by needlessly paying their last point of life to counter a spell unnecessarily: 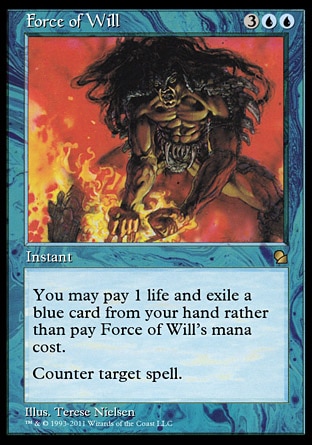 * Aside: In the past, I’ve used the phrase “put the onus on the opponent” to talk about minimizing risk while comfortably maintaining a gamestate where the opponent is disadvantaged, where if nothing changes the status quo will bring you more advantage or a win, forcing the opponent to take on risk in trying to “make something happen” that might upset this trajectory.